As cannabis reform finally begins to hit the UK, the same confusion, lack of standards and uneven application of the “law” reigns supreme.

Just like other places (notably Israel, the United States and Canada), in the early days after medical reform hits, the English situation is instructive if not reminiscent of other fights elsewhere – no matter how much individual stories may differ on the surface. Just like in Israel for example, sick children had to be hospitalized before anyone moved forward on reform.

Just like in the United States, Canada and Israel, the people who were able to get into the changing industry first and early had money and political connections.

And just like everywhere else, who survives and who gets hit with red tape, is largely a matter not of entrepreneurial savvy, but connections, inherited privilege, race, gender and of course, bank account. In a place like the UK, where “class” is still a valid force on its own (beyond access to money), this is already obvious. As a theme, it is one that is sadly, not over yet for too many in or affected by “the industry.”

There are still, per the estimates available, less than 100 legal patients in the UK. Those served by the NHS are also well aware of their “second class” status when it comes to healthcare. This one issue, after all, drove Brexit, and may yet cause it to fail, just on this one issue. Cannabis may be a side note in the debate. But it is also, by this time, clearly in the room.

In January, two graduates of Imperial Business School (a private, prestigious university in London) opened a “pop up shop” (kind of like a kiosk) in Chelsea. This is a part of the city frequented by Royals on the hoof, reality stars of a certain vintage, and a lot of highly priced real estate.

So far, with the predictable fawning press coverage, the almost too “cutely” named TheDrug.Store (which by its own admission is selling non-medical products) has been doing brisk business. 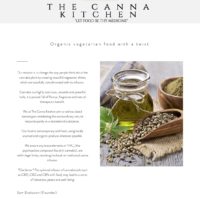 Meanwhile, in the historic if less slightly less elite but almost as expensive touristy seaside town of Brighton, The Canna Kitchen, a CBD eatery with the catchy slogan of “let food be thy medicine”, was closed by the police right before it was supposed to open at the end of May (although there is no mention of this or the negative press on the website, which despite having no telephone number, still allows visitors to “book a table.”) The owners, who also seem to be quite well-heeled millennials themselves, appear to be on the verge of “losing hundreds of thousands of pounds and laying off 15 staff,” to quote The Guardian story on the subject.

Never mind the irony that they also seem rather well positioned financially. Or that many, many more people, usually called poor patients, are still at risk of being hospitalized because they cannot get (or afford) their medication.

As the industry, such as it is, and patient rights group organize in earnest this summer, reform in the UK also hinges on whether and what the country decides to do in the fall.

And despite the huge disparities that exist in terms of who has access (let alone to entrepreneurial capital), or perhaps because of them, look for a healthy debate from patients about policy, access and fairness.